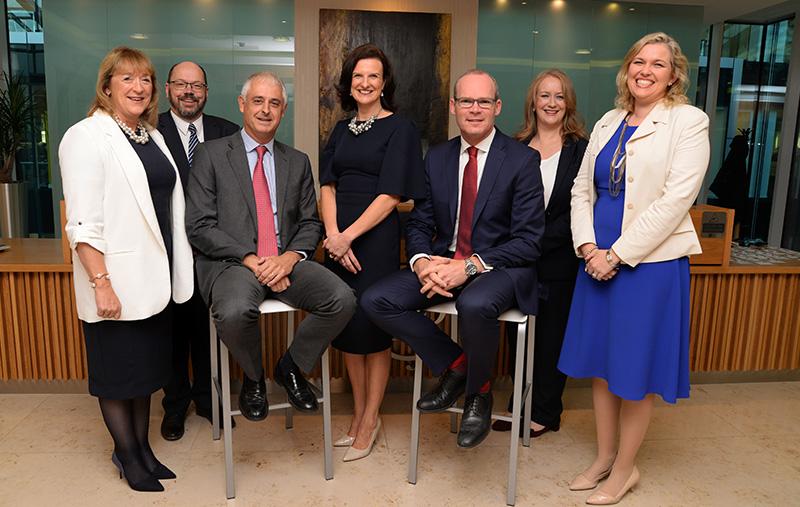 After a successful launch in Dublin of our HR Brexit Ready programme in June with our partners – European Movement Ireland, Ronan Daly Jermyn, Fragomen, Morgan McKinley – we  visited Cork on 25th September and co-hosted an exclusive Brexit Briefing with Guest of Honour, Minister Simon Coveney, TD., Minister for Foreign Affairs and Trade with responsibility for Brexit. The emphasis was very much on business’ key asset – its employees.

The series of events on the HR perspective of Brexit brought together business leaders and HR professionals to address how companies can help their people negotiate Brexit and the challenges it may create for them.

Chairing the seminar, Noelle O’Connell, Executive Director of European Movement Ireland, said: “It’s now nearly 6 months since Prime Minister May triggered Article 50 and with less than 550 days till the UK is due to exit the EU, it is vital that Irish businesses and organisations ramp up their engagement in terms of getting ready for Brexit. This is particularly important from a people and HR perspective and it is why we’ve brought together the leading companies in Cork to devise a HR Roadmap for Brexit.”
Opening the conference, keynote speaker Minister for Foreign Affairs and Trade with Special Responsibility for Brexit, Mr Simon Coveney TD said: “Brexit presents unprecedented political, economic and diplomatic challenges for Ireland. The Government’s response has been unrelenting. Ireland’s concerns and priorities are fully reflected in the EU’s negotiating position. We are clear on what we want: the gains of the peace process protected, including avoiding a hard border; an orderly UK withdrawal; a sufficiently long and non-disruptive transition arrangement; and the closest possible EU-UK future relationship. We need to minimise the impact on our trade and economy. At home, the Government has already taken important steps to prepare our economy with more to come, including a new 10-year capital plan. But our businesses also need to prepare and the Government wants to help. Our enterprise agencies continue to work with companies, helping them to deal with Brexit – making them more competitive, diversifying market exposure, and up-skilling teams.”
Hosted in Ronan Daly Jermyn Law (RDJ) offices in Cork, RDJ Employment Partner, Jennifer Cashman noted that: “Businesses must focus their Brexit impact assessments on their greatest asset – their people. Irish employers with operations in the UK, and vice versa, must review and audit their staffing arrangements to identify any necessary restructuring. Employment contracts, secondment arrangements and expatriate arrangements must all form part of this audit process to identify the potential impact of Brexit on existing arrangements. Employers also need to be cognisant of the potential impact of Brexit on pensions, staff retention and succession planning and determine what steps need to be taken to mitigate the impact and risks.”
Focusing on the immigration impact for employers, Bill Foster, a Partner with Fragomen, noted that there are options for Irish and British nationals that will allow them to remain in each other’s countries post-Brexit and that should give both employers and their workers some comfort. However, he went on to say: “The August policy paper on Ireland from the British Government, saying they will maintain all rights under the Common Travel Area, is helpful for businesses to plan for Brexit, but there is an awful lot of work to be done by the UK government to satisfy all parties that the border with Northern Ireland will remain open and free from any control.”
HR business consultancy Voltedge’s Co-Founder, Joyce Rigby Jones, said that Voltedge suggests employers should appoint a ‘Brexit Champion’ to focus the business and have a central point of contact for employees. “Employees are our most important resource however Brexit planning continues to focus entirely on the business and financial implications – we need to re-focus on what is important”, she said.
Trayc Keevans, Director of Inward Investment Global with Morgan McKinley, was also speaking at the event. She commentated that: “There are high levels of mobility in the professional jobs market in Ireland and strong interest among potential inbound employees from the EEA including currently the UK where, in July, the UK government announced an end to freedom of movement for EU nationals by March 2019.” She added that: “Businesses in Ireland need to be geared up to support UK citizens currently working here so as to reassure and retain them in the Irish workforce, and also to attract new skills and talent which may otherwise depart the UK in the context of Brexit. Foreign investment interest in Ireland is strong including multinationals considering Ireland as a European hub and who have already ruled out other locations. This is due largely to Ireland’s overall competitiveness, skills availability and supportive business climate which we must all work hard to promote and maintain.”

This was the second of HR Brexit Events and we’d be delighted to speak to you further on any HR Brexit queries you might have and advise you on how to navigate your business and your team. Email HRBrexit@voltedge.ie.

Why is it important to have an OOTO message while on Annual Leave?